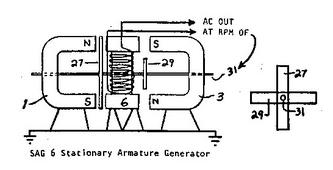 [original page] Remember such sayings as couldn't see the forest for the trees, or if it had been a snake it would have bit you?  Well, that's what you'll be thinking after reading about the Ecklin stationary armature generator.  Don't let the simplicity of this device fool you into thinking it can't be anything important. It may well be the best answer yet to our energy problems.  It is the very simplicity of what is required to produce electrical power that has led the makers of generating equipment in the wrong direction from the beginning.  All that is needed to get electricity from a coil of wire is to have a changing magnetic field at the coil.

From the very beginnings of the invention of generating equipment, it seems the only way that has been considered to obtain the changing magnetic field has been the moving of coils of wire past magnets or magnets past coils.  It was told they couldn't see the forest for the trees all right.  They reasoned that in order to get a changing magnetic field, they just had to move one or the other, and in doing so consume 98% of the input energy while they were at it.  They were concentrated on the wrong problem.  The problem easily became how to move the coils or the magnets.

Although that did change the magnetic field all right, it led people to believe that the only problem involved in engineering a good generator was the problem of the moving of coils past magnets or magnets past coils.  Since the idea has worked, however inefficiently, for so many years now, this way in which we produce electricity has taken on a sort of sacredness to many people.  You just don't question something that does in fact work, and you certainly don't question something that has worked for such a long period of time.

Why, you'd just have to be crazy, they'll tell you, to think that moving coils past magnets or magnets past coils isn't 'the' way to produce power.  And that leads us to Mr. Ecklin's SAG 6.  Using a slightly different configuration of his patent number 3,879,622 shown below, he's made both the magnets and the coil stationary.  That being the case, you don't have the problem of using up most of your input power moving heavy masses of coils or magnets.  What we have here then is what should have been invented to begin with - a method of changing the magnetic field of oppositely polarized magnets 1 and 3 in a simplified way, just by the use of diverters 27 and 29 to alternately reverse the magnetic field thru coil 6.

This is a far more efficient way of doing things.  Mr. Ecklin says that like most things in nature, magnetic fields take and make the easiest path and prefer the soft steel in 27 and 29 more than 7,000 to one compared to air.  He also says the losses in a SAG 6 are less than 2% since there is less iron in 27 and 29 than in the rotors of today's generators.  A SAG 6 can be at least 50 times or 5OOO% more efficient than today's generators since it does not turn a magnet or coil and has no brushes.

Since you get six times more out of a SAG 6 than you put in, you can use one sixth of the output for an ordinary electric motor to turn shaft 31.  Put a 2 KW motor (about 3 HP) on at 3,600 RPM and you get 10 KW of useable power.  (12Kw total minus 2 KW for the motor = 10Kw).  He envisions in a car the motor to shaft 31 being started by a battery like those used on a motorcycle.  From then on the output of the generator turns this motor plus the drive motors on the car and recharges the battery.  The same idea applies to the home since the 60 CPS output (at 3,600 RPM) can heat your home plus do all those things you now make a monthly payment for.