Method of preventing magnetic flux from extending into a target material.

To all whom it may concern be it known that I, Gaby de Wilde, artist, subject of the Dutch Queen, of Dutch nationality, a citizen of the independent monarchy of the Netherlands governed by members of the House of Orange Nassau, residence of Enkhuizen, in the Province of North-Holland the Kingdom of the Netherlands, hereby disclose an exact and acurate description of novel method for routing magnetic flux out of a target material and explanation there-of, thus-therefor presenting those skilled in the art with the most useful tools to turn the field of a permanent magnet on and off furthermore thus providing new and useful improvements to the way we view electric motors I hereby declare ofwhich the following specification to be a full, clear, exact and accurate description, such as will enable others skilled in the art to which it appertains to make and use the same furthermore thus so~on as a direct result thereof providing new and useful improvements to the way we view electric motors and think thereof. 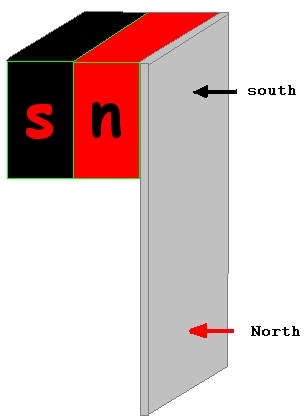 In this image the metal strip has become a magnet. It now has a north pole and a south pole. The magnetic flux extends all the way down the strip magnetizing it as intense as it can. 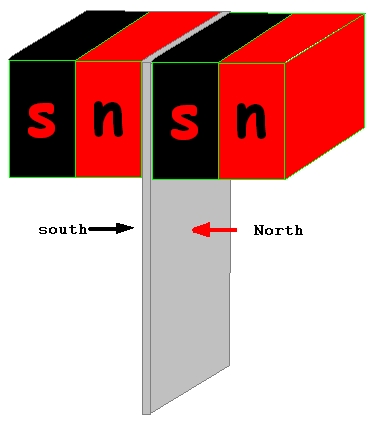 This is that same strip and that same magnet, the only new thing is the additional second magnet. The metal strip now has a north pole at the right and a south pole at the left. As a direct result of this the poles do-not extend all the way down.