To all whom it may concern be it known that I, Gaby de Wilde, artist, subject of the Dutch Queen, of Dutch nationality, a citizen of the independent monarchy of the Netherlands governed by members of the House of Orange Nassau, residence of Enkhuizen, in the Province of North-Holland the Kingdom of the Netherlands, have invented a method of making magnets interact unequally thus allowing for the construction of perpetual motion apparatus in the most general sense thereof I hereby declare ofwhich the following specification to be a full, clear, exact and accurate description of the invention, such as will enable others skilled in the art to which it appertains to use the same as from. 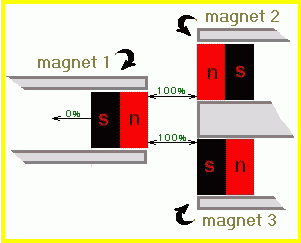 We have 3 permanent magnetic bodies. On our left we have body 1 on our right we have body 2 and body 3 where body 1 and body 2 repel each other with X force while body 1 and body 3 attract eachother with X force wherefrom we shall conclude that body 2 and body 3 are both subjected to the full magnetomecanical interaction force of 2 time X while body 1 is merely "subjected" to the subtraction of X minus X, body 1 is thus at rest for it's curl "adds up" to zero. X-X=X+X 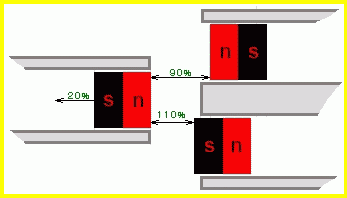 We need to apply above described force over a distance in order to accomplish that what we refer to as work therefrom. After 1 mm of motion the forces don't "add" up to zero any longer. Still body 1 is subjected to the subtraction of both forces ( X-X') while body 2 and body 3 continue to be subjected to the sum even tho it's not distributed equally. X+X'

Apparently Newton (in having researched perpetual~motion) was just wrong in his observation and so where quite a few other people. Still his method is that what allowed for this publication to happen.
Physics has given to much credit where it wasn't due disabling to recognize the sum of attraction and repulsion can not do work from which on thus therefor and so~on does not cost work either as rest is infinitely efficient you shall not wear out such.