I found this tremendously interesting post on http://www.unexplained-mysteries.com, written by Darkbreed.

I believe large parts of Latin-Americas got submerged under water due to some cataclysmic event in the past. The evidence for this is there: 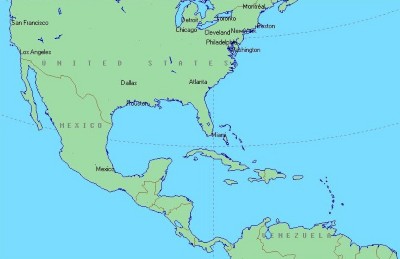 Look at a map of Latin Americas for starter, if you look at Mexico notice the Gulf of Mexico, and further down the Caribbean ocean. Here it seems very likely to me that there once was dry land that now is gone, filling up the gap that is now between Mexico and rest of South America. And the evidence for this has been found by underwater monuments, artifacts and ruins in the mentioned area.

And if you follow Plato's own description of where Atlantis is located, he says its a place far away in the atlantic ocean, opposite the strait of gibraltar. The Strait of Gibraltar is the strait that divides Spain from Marocco. If you travel through it and thus to the opposite side and continue until you reach another continent you end up in South America.

And while we are at this route, there is also evidence of contact between south america and africa in ancient times. Among things worth mentioning, there has been found traces of cocaine and tobacco in egyptian mummies, and both these are native to south america. Possibly "atlanteans" who escaped from the disaster and ended up in Africa and thus taught the egyptians some of their knowledge about stone technology and construction among other things as well as establishing some trading route with south america.

There are many similarities between egyptian pyramids and south american ones, specially when it comes to the masonry and stone technology. And this technology again fits the description of atlantis and their advanced knowledge. Even to this day modern science doesnt know how they buildt these magnificent structures or how they processed the stones etc.

Here is some aztec earplugs made of stone, less than one mm thick sides: Egyptian "tube" facioned in a way very similar to the aztec earplugs above:

To me it seems both the egyptians and the latin americans had similar knowledge on how to work with stone. Could this be because the egyptians had learned it from the migrating south americans (Atlanteans)?
And here is an egyptian vase, made out of solid granite in one piece, and hollowed out:

In addition there were the unknown pre-incan people, who buildt Machu Picchu among other things. The incas themselves just buildt upon a pre-existing foundation and structures that were allready there - the evidence is clear as the incas structures were not as advanced and of as excellent quality as that of their preceders. And these pre-incan monuments show they had a vast knowledge and very advanced building and construction skills. None have been able to repliacte these skills in later generations - though they have tried to imitate. Here is an example of a pre-incan wall:

And here is an example of excellent pre-incan wall with sloppy incan extended work of rubble on top: If you walk around in places like Machu Picchu and other south american ruins it will become clear that there were some highly advanced civilization that suddenly dissapeared and left their buildings and structures unfinished, and then later incas and others came and started build on top of the ruins they found which was allready ancient for them as well.

Nobody knows what happened to this pre-incan people, where they went, or why they suddenly dissapeared. But it seems quite likely its related to some ancient disaster happening that made the people of those days flee their homes and cities.
If you want to know more about the ancient stone technology I highly reccomand you to check this documentary called Technology of the Gods:
http://www.dark-truth.org/okt21-2006-10.html

If we again go back to Plato and his description of the continent of Atlantis, he said it was "bigger than Libya and Asia put together". So we are talking about a very large continent here, and what other continent could fit this description than South America, when we also take in consideration the other descriptions Plato gave us about this continent?

Places in Latin America also fits the description of Atlantis in more ways, f.ex a researcher named Jim Allen has discovered that Bolivia fits rather perfectly with how Atlantis (the capital city) is described to be a rectangular island high above the sea level - the mountains. Check Jim Allens theories on this at his website:

And the local natives have ancient legends telling about a great flood that raged the planet and swept cities away around 10,000 years ago - which could suit well with the destruction of Atlantis. There are also other similar ancient stories about floods and terrible earthquakes and erupting volcanos around in South America, check this site for more info on this: http://www.labyrinthina.com/flood.htm

Notice that the Nahuatl TlÃ¡n root of these place names is exactly like the Tlan in "Atlantis."
And the pre-conquest Meso-Americans claimed that their primordial founding city was TollÃ¡n, which is another variety of Tlan.

Hard evidence suggests that Sanskrit is the father of most world-class languages. If we use Sanskrit to explain the true meaning of "Atlantis," we'll learn that the initial A means "Not; No longer." The final Tis derives from the Sanskrit Desa, Des, or Tes, meaning "Nation." Atlantis = "No-Longer-the-'Tlan'-or-'TollÃ¡n'-Nation." When A-Tlan-Tis sank under the ocean named after it, it certainly ceased to exist.

For more indepth liguistic analysis and theories of Mexico being part of Atlantis check this website:
http://www.dark-truth.org/okt18-2006-12.html

Of course there is a lot more mysteries regarding South America that could possibly relate to an ancient advanced civilization of Atlantis. In addition to all the monuments, pyramids, temples and structures all the way from Mexico and down towards Brazil in South America, we also have strange places like the Nazca lines of Peru that I assume most people are familiar with, and the Ica stones found in an area close to them, which depicts advanced surgery, astronomy and use of telsescopes, people together with dinosaurs and more, that cold be the remains of such an advanced and long passed but not forgotten civilization. I do not have the time to tell more about this and other things right now, perhaps some time later.

So, with what I have mentioned above in consideration, doesnt it seem possible that Latin Americas actually was the so called continent of Atlantis, and some of these people who once lived there managed to escape and migrated to Egypt, bringing with them some of their knowledge and thus also being responsible for the greatness of the Egyptian civilizations wonders? At least I think so myself.