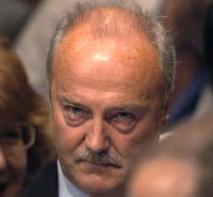 What an amusing man, he must have called the senator 100 names now(live on cnn).  Galloway says prepared for US Senate 'lynch mob'  I hope you get a chance to see the full speech, it's hilarious. Brits will always speak their mind.  This looks more like Galloway is lynching the US Senate.

He is furious about having to  defend himself after they accused him without consulting him.  He claims 18 billion (us money) vanished into the pockets of us officials.  Kick backs were payed by us oil companies.

He was against the oil for food program because he believed it would end in a mass grave. 0.03 cent per head didn't look like food to him.  Add to this "the the war was illegal".  I would have to agree?