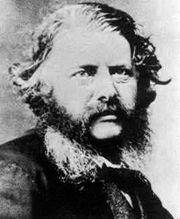 Scottish engineer and physicist William John Macquorn Rankine (1820, 1872) was a founding contributor to the science of thermodynamics. (With Rudolf Clausius and William Thomson (Lord Kelvin)). Rankine developed a complete theory of the steam engine and indeed of all heat engines. His manuals of engineering science and practice were used for many decades after their publication in the 1850s and 1860s. He published several hundred papers and notes on science and engineering topics, from 1840 onwards, and his interests were extremely varied, including, in his youth, botany, music theory and number theory, and, in his mature years, most major branches of science, mathematics and engineering. He was an enthusiastic amateur singer, pianist and cellist who composed his own humorous songs. He was born in Edinburgh and died in Glasgow, a bachelor.

Rankine is a thermodynamic (absolute) temperature scale named after the Scottish engineer, who proposed it in 1859. The symbol is Â°R. As with the Kelvin scale, zero on is absolute zero, but the Rankine degree is defined as equal to one degree Fahrenheit, rather than the one degree Celsius used by the Kelvin scale. A temperature of 459.67 Â°R is precisely equal to 0 Â°F.

Tesla, (in his apparatus for areal transportation) references his fundamental laws of fluid propulsion with which the trust is equal to the integral sum of the products of the masses and velocities of the projected air particles.