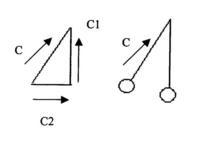 The invention extracts energy from gravity based on the corrected theory of the pendulum. When the pendulum is pushed, it will 'lead out' gravitational energy at the same time. If a source of pulse force (F) is applied to the pendulum at resonance, it will keep 'lead out' gravitational energy. This gravitational energy can be extracted by techniques such as allowing the metallic wired pendulum to cut across the lines of magnetic force to generate electricity. The swinging motion of the pendulum will be slowed down because the mechanical energy is converted to electrical energy. However, such slowing down is speeded up via pulse force (F). The swinging motion can be changed into a constant rotational motion for a more efficient operation.
Claims:

This invention is related to the extraction of energy from gravity. Such energy is virtually limitless and is available everywhere including on the moon.

Mankind has played with the swing for Centuries. They do not realize that when they push the swing, they get Energy from Gravity at the same time. Many people, especially little boys, have deliberately allowed the swing (or the punch bag) to knock them after pushing the swing a couple of times. They all suspected that the force knocking them was much more than the energy they supplied in the couple of pushes.

However, the existing textbooks do not consider the Energy from Gravity term and attribute the force to resonance only. They assume that all the energy must come from the couple of pushes. This misunderstanding has prevented scientists and engineers to design methods or devices that Extract Energy from Gravity for Centuries. Some inventors actually produced inventions that could Extract Energy from Gravity. However, they did not have the theoretical basis to justify their inventions. Many of these inventions were classified as impossible "perpetual motion machines" and were rejected by scientists and many Patent Offices worldwide. 3. Disclosure of Invention

The theoretical breakthrough needed is the understanding and the deriving of the underlying formulae related to the swing or the pendulum systems. The Steps involved in Extracting Energy from Gravity are:

1. Push the pendulum with a Pulse Force at resonance.

2. The swinging of the pendulum will "lead out" the Gravitational Force. This fact has never been taught correctly in textbooks.

3. Some of the commercially available swinging toys already use an integrated circuit to provide the Pulse Force. These swinging toys can use batteries or photoelectric cells.

4. If the string of the swinging toy or pendulum is replaced by a copper wire and placed between two magnets, the copper wire will cut the magnetic lines of force and generate electricity. The swinging motion will be slowed down - kinetic energy turning into electrical energy.

5. If the swinging motion is speeded up again via the pulse force, we can repeat step 4 and get a primitive Electricity Generator that Extracts Energy from Gravity.

Mathematics behind Extracting Energy from Gravity Let us consider the situation of a ball suspended by a string (pendulum) in Fig. 1. In Fig. 1, a small "pulse force" F is applied to the ball (mass = M) with a displacement d. The Physical Laws demand that there should be an acceleration equal to A where F=MA. The energy imparted will be equal to Force multiplied by displacement (Fd). The final velocity acquired should be v. (where v is determined by the energy equation Fd = 1/2 Mv2.) If there were no string, no friction, no gravity, no air resistance etc, the ball should acquire the velocity v and continue along a straight line forever.

With the presence of the string and Gravity, the ball acquires the position X in Fig. 1.

In Fig. 2, we view the situation using the concept of circular motion. The ball is moved up and to the left because of the Centripetal force C.

We can treat the Centripetal force C as made up of two components.

1. Component Cl is in the vertical direction. It acts against gravity and lifts the ball upwards. Work is done and energy is spent.

2. Component C2 is in the horizontal direction opposite to the motion of the ball.

It acts on the ball and slows it down until the velocity is zero. Work is done and energy is spent.

There are effectively two energy components acting on the system. One is the pulse energy supplied to start or maintain motion. The other is the energy supplied by the string to lift the ball against gravity! This means we "lead" the gravitational energy into the system when we push or swing the pendulum!

The correct Energy Relationship of the Pendulum (assume no energy loss) should be:

Energy In = Energy Out

Embodiment 1: Use of the simple pendulum

Use a copper wire to suspend the pendulum. Put the pendulum in between two magnets and let the swinging motion cut the magnetic field. Use the generated electricity to do work and to supply the periodic horizontal pulse energy. This is the simplest and the most obvious solution. However, the electrical current generated will vary from zero to a certain maximum and will change direction. Sophisticated Integrated Circuit Control is needed to provide a smooth, practical electricity generator. If the purpose is just to demonstrate the principle such as lighting a light bulb, it may be good enough. Embodiment 2: Use a constant speed rotating wheel

Conceptually, we can swing the pendulum in a complete circle without violating the theory. In practice, we replace the pendulum with metallic rods arranged in the form of a wheel. The generating of electric current will slow down the motion of the rotating wheel but the pulse circuits will 'lead out1 additional gravitational energy to accelerate the motion. If properly controlled, the rotational speed can be kept constant and the generation of Electric Current will be steady and in one direction only. This effectively is a Direct Current Electricity Generator. The secret of success lies in the positioning and control of the various magnets or pulse circuits. The Energy extracted from Gravity per revolution can be as much as 2MGR where R is the length of the pendulum string (or radius of the wheel in this embodiment). This value may be less if some of the pulse circuits supply the vertical force/energy. However, so long as Gravitational Energy enters into the system, we get free Energy from Gravity. Embodiment 3: Use of water in a double wheel

We can also use water in a vertical spinning double wheel to Extract Energy from Gravity. If there were no gravity, the water should be uniformly distributed at the outer side of the wheel. However, because of gravity, the distribution of water will not be uniform. There will be a wider water path at the up moving side and a narrower water path at the down moving side. (This is because water travels slower on the up moving side because of gravity.) We can use a central shaft with fins to extract energy from the up moving water or we can use an off center shaft with fins to extract energy from the down moving water. 4. Brief Description of Drawings

Fig.l shows the operation of the simple pendulum. A short duration Pulse Force F is applied to push the ball (Mass = M) for a short distance d. If there were no string, no air resistance and no gravity, the ball should accelerate with acceleration A (F=MA) until a velocity v (Fd = 1/2 Mv2) is reached. The ball should then move along a straight line with velocity v forever according to Newton's Laws of Motion. However, with the presence of the string and gravity, the ball moves to position X.

Fig. 2 shows the resolution of the Centripetal Force C into two components Cl and C2. Cl lifts the ball up against gravity and does work. The resulting energy goes into the Pendulum system. This is the "Energy from Gravity". C2 is in the opposite direction of the Pulse Force F and does work in slowing the ball from velocity v to zero. Cl can be much greater than C2 as judged by the Parallelogram of Forces. This means that if we want to get more Energy from Gravity, we should apply smaller but more often the Pulse Force F.

5. Best Modes of Carrying out the Invention

The best mode of carrying out the invention is Embodiment 2 (use of a constant speed rotating wheel) as described in Section 3. If the invention were used to generate electricity only, we can draw electrical energy out directly by placing the rotating wheel in a magnetic field. The rotating mechanical energy will be converted into electrical energy directly. The rotating speed will decrease but the Pulse Circuits will "lead out" more gravitational energy to replenish the speed. If more electricity is required, we can increase the rotating speed or increase the number of pulses per revolution. 6. Prior Art or Patents

We are aware that many scientists are working in the energy field. Some of them are also using Energy from Gravity. One known patent from China is 02113293.3 granted on Aug 13, 2003. This patent uses the vibration energy when a vehicle travels over an uneven ground to generate electricity. It can supplement or recover some of the loss energy from an electric car but cannot be the prime source of its energy. Our theory can be applied to swinging resonance systems as well as to vibrating resonance systems. Our invention is superior because we can be the prime source of energy of the electric car.

Another known patent from China is 01123526.8 granted on March 5, 2003. This patents uses a rotating cylinder and extracts the gravitational energy from the central shaft to drive a car. It describes one very good mode of operation. (Thus we leave out this mode of operation - use the central shaft in our claims.) However the inventor did not fully understand the theory. In his marketing literature, he explained his understanding of the phenomenon using a mixture of Chinese Philosophy, Western Science, and mysterious Cosmic Forces. He did not realize that the theory was a simple 'leading out' of the gravitational force from the swinging motion of a pendulum.

In our explanation of the corrected theory of the pendulum, we have effectively removed the mysterious source of energy in the prior art. The same theory can be used to explain the extraction of energy from magnetic fields, etc.