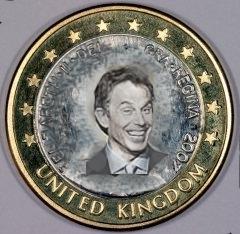 The poor people are there to keep the working-class in fear. They have an important role to play on this stage. The only reason people accept horrid jobs is because they don't want to end up on the street. The thought we wouldn't know how to build houses for them is of the most retarded thinking I have ever observed. If they buy a freaking caravan it gets taken away from them. This is because they want you to see them on the streets (that's who). That's mandatory for this formula to work.

You may argue they should pay some idiot billionaire heaps of cash for a pile of rocks. I don't agree at all, this is as much my planet as it is yours. This money is a cartoon printed on paper and nothing more. That house is as much yours as it is mine. The starving people on the street are the same kind of brainwashing as that of heads on poles. gheee, I don't want my head on a pole.....

I see 1 man and a tractor on the field. He makes food for hundreds of thousands. Why would we work like slaves to earn this food? All useless work is useless, it's just that and nothing more. It destroys the world. That's the product of the sum.

If we would feed and educate everyone we would all be professors. We wouldn't have anything to do. You don't have to go to school because you have your parents right-there at-home to teach-you. This is called culture, I say "lets have it? doh?"

It would take a mighty fine idiot to claim 5 000 000 000 professors can-not automate something. Any claim in denial of the potential of such collective genius is merely a display of it's author stupidity. We have this gigantic universe jet we sit here piled up on this rock like a bunch of lunatics? ..or no? They forced us into cities under the cloak of industrial revolution but it was purely to make us fully dependant on authorities to supply the food and housing.