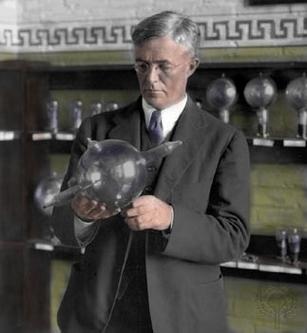 Irving Langmuir was born in Brooklyn, New York, on January 31, 1881, as the third of four sons of Charles Langmuir and Sadie, neÃ© Comings. His early education was obtained in various schools and institutes in the USA, and in Paris (1892-1895). He graduated as a metallurgical engineer from the School of Mines at Columbia University in 1903. Postgraduate work in Physical Chemistry under Nernst in GÃ¶ttingen earned him the degrees of M.A. and Ph.D. in 1906.

Returning to America, Dr. Langmuir became Instructor in Chemistry at Stevens Institute of Technology, Hoboken, New Jersey, where he taught until July 1909. He then entered the Research Laboratory of the General Electric Company at Schenectady where he eventually became Associate Director.

Langmuir's studies embraced chemistry, physics, and engineering and were largely the outgrowth of studies of vacuum phenomena. In seeking the atomic and molecular mechanisms of these he investigated the properties of adsorbed films and the nature of electric discharges in high vacuum and in certain gases at low pressures.

His work on filaments in gases led directly to the invention of the gasfilled incandescent lamp and to the discovery of atomic hydrogen. He later used the latter in the development of the atomic hydrogen welding process.

He was the first to observe the very stable adsorbed monatomic films on tungsten and platinum filaments, and was able, after experiments with oil films on water, to formulate a general theory of adsorbed films. He also studied the catalytic properties of such films.

Langmuir's work on space charge effects and related phenomena led to many important technical developments which have had a profound effect on later technology.

In chemistry, his interest in reaction mechanism caused him to study structure and valence, and he contributed to the development of the Lewis theory of shared electrons.

Dr. Langmuir's hobbies were mountaineering, skiing, flying, and, most of all, to understand the mechanism of simple and familiar natural phenomena. He married Marion Mersereau in 1912. They had a son, Kenneth, and a daughter, Barbara. After a short illness, he died on August 16, 1957.

This autobiography/biography was first published in the book series Les Prix Nobel. It was later edited and republished in Nobel Lectures. To cite this document, always state the source as shown above.