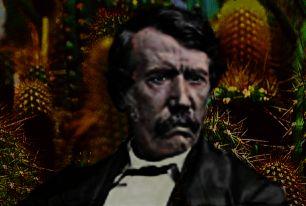 remote viewing is done by drawing something while thinking about it. no success guaranteed. I have however discovered a side step to this hack that does at least give some results at 100% probability. May it be secondary they do offer a guarantee of some kind. The trick evolves around a cluster of ideas and concepts actually. The one I'm initially describing here is not necessarily the most innovative or most useful. It's just easy to document it from here.

The first idea of the cluster was based on the obvious lack of photography of famous people who lived say 100+ years ago. Depending on how important or famous they where there may be a few paintings of them. Oil paint is a very hard medium to work with but after much effort does allow the create a good shade of colors representing the model. It's amazing what a bit of blur and a few highlights can do with an image. Then something magical happens....

The original painter did his best to put the emotion onto the canvas or the camera grasped a moment of this. So while looking at the face of this person and playing with the drawing application you see the emotion change the moment you change the wrong line. The image slowly grows on you.

After a hand full of self corrections it all of a sudden becomes obvious what kind of feeling goes with the expression on the canvas. Slowly but surly you grow into a mood reflected from the original person.

The picture at the top is David Livingstone now he appears to me to be a pirate. I mean look at him? All he needs is a golden earring and a parrot. ha-ha

This is RRRife looking at him gives me the impression of a genius - it's not likely anyone would understand this man while he was alive, we lost his documentation jep it's quite the embarrassment for us hairless monkeys. I hope we can some day honor him properly. You know build an altar, burn goats, that kind of thing. Maybe even make a real film about him. But looking at the image I think he means to say hello to us.

Anywayz, you may get new insight into a persons work but you will learn by just using the drawing app, you will learn drawing by drawing and you will eventually end up with an at least interesting image that represents the carrier of the train of thoughts while you made it.

I know neither image you see here is impressive but that's not the point at all, they are the waist product. This article for example presents much better leverage of the idea. The professional wording for this technique is "preforming a ritual", it's preformed to induce a brainstate just like in neuroscience.

Now I've documented the idea and no one is going to understand or apply it again. ah... the irony... haha