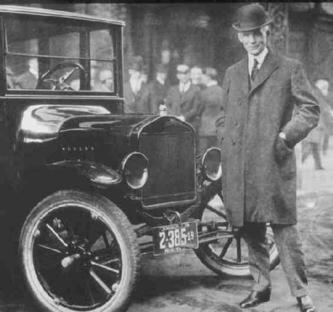 The first year model Ts built by Ford had a special flywheel and housing that was said to have been designed by John Worrell Keely and sold to Henry Ford. Ford bought the design as a form of insurance because of all the harassment he was getting from vested interests not wanting to see him succeed.

After 20,000 to 30,000 cars went out, Ford was threatened by oil and gas interests trying to coerce him to shut down production. It was not made clear who these forces were or why they were trying to put Ford out of business.

After the first year of manufacturing Model Ts, efforts were renewed to shut Ford down. At this point, Ford then gave THEM an ultimatum, either leave he and his family alone or he would send every Ford Model T owner a set of cow magnets which fit in special slots that were cut into the bell housings on the first year run of cars. This bell housing was cast into the engine block and not a separate unit as on modern vehicles.

The flywheels were the hand cranked units having Vee magnets. They were magnetos that when cranked, moved the magnets past a coil to produce a very high voltage/current to spark the plugs. It produced a vicious spark.

Once the cow magnets were placed in the slots, the hand crank was turned and the flywheel would spin on its own, generating up to 40 HP and completely self running.

You had to get the flywheel spinning to a minimum rpm before the magnetic drive effect would take place.

Ford told his opponents that all Model T owners would then be running their cars for FREE, not requiring any gasoline or other fuel. And that the principle would be copied and applied to all machinery.

Once Ford's opposing forces verified the truth of this, they instantly ceased all attempts at intimidating Ford and his company succeeded beyond their wildest dreams.

And we got canabalised over this practical joke ever after.....