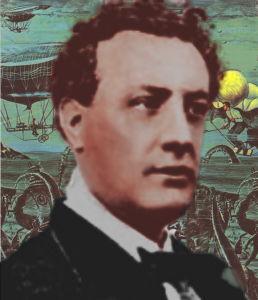 "In order, then, to effect an ascent, I give the gas a temperature superior to the temperature of the surrounding air by means of my cylinder. By this excess of heat it obtains a larger distention, and inflates the balloon more. The latter, then, ascends in proportion as I heat the hydrogen.

"The descent, of course, is effected by lowering the heat of the cylinder, and letting the temperature abate. The ascent would be, usually, more rapid than the descent; but that is a fortunate circumstance, since it is of no importance to me to descend rapidly, while, on the other hand, it is by a very rapid ascent that I avoid obstacles. The real danger lurks below, and not above.

"Besides, as I have said, I have a certain quantity of ballast, which will enable me to ascend more rapidly still, when necessary. My valve, at the top of the balloon, is nothing more nor less than a safety-valve. The balloon always retains the same quantity of hydrogen, and the variations of temperature that I produce in the midst of this shut-up gas are, of themselves, sufficient to provide for all these ascending and descending movements.

"Now, gentlemen, as a practical detail, let me add this:

"The combustion of the hydrogen and of the oxygen at the point of the cylinder produces solely the vapor or steam of water. I have, therefore, provided the lower part of the cylindrical iron box with a scape-pipe, with a valve operating by means of a pressure of two atmospheres; consequently, so soon as this amount of pressure is attained, the steam escapes of itself.

"Here are the exact figures: 25 gallons of water, separated into its constituent elements, yield 200 pounds of oxygen and 25 pounds of hydrogen. This represents, at atmospheric tension, 1,800 cubic feet of the former and 3,780 cubic feet of the latter, or 5,670 cubic feet, in all, of the mixture. Hence, the stopcock of my cylinder, when fully open, expends 27 cubic feet per hour, with a flame at least six times as strong as that of the large lamps used for lighting streets. On an average, then, and in order to keep myself at a very moderate elevation, I should not burn more than nine cubic feet per hour, so that my twenty-five gallons of water represent six hundred and thirty-six hours of aerial navigation, or a little more than twenty-six days.

"Well, as I can descend when I please, to replenish my stock of water on the way, my trip might be indefinitely prolonged.

"Such, gentlemen, is my secret. It is simple, and, like most simple things, it cannot fail to succeed. The dilation and contraction of the gas in the balloon is my means of locomotion, which calls for neither cumbersome wings, nor any other mechanical motor. A calorifere to produce the changes of temperature, and a cylinder to generate the heat, are neither inconvenient nor heavy. I think, therefore, that I have combined all the elements of success."

Dr. Ferguson here terminated his discourse, and was most heartily applauded. There was not an objection to make to it; all had been foreseen and decided.

I've been busy reading and collecting the information on the web about browns gas, which apparently was already invented a hundred times. What was interesting in this context was the self propagating welding arc. The heat from the Browns gas arc it-self is the main fuel source for disassociation, so the thermolysis takes place on the surface of the material.

That calorifere[1] Jules describes hereabove is much a-like this water fuel concept. Only much more spectacular.

It all had been foreseen.

[1] - An apparatus for conveying and distributing heat, especially by means of hot water circulating in tubes.