To all whom it may concern be it known that I, Gaby de Wilde, artist, subject of the Dutch Queen, of Dutch nationality, a citizen of the independent monarchy of the Netherlands governed by members of the House of Orange Nassau, residence of Enkhuizen, in the Province of North-Holland the Kingdom of the Netherlands, have invented a dynamo-electrical device capible of ambient energy extraction I hereby declare ofwhich the following specification to be a full, clear, exact and acurate description of the invention, such as will enable others skilled in the art to which it appertains to make and use the same furthermore thus so~on as a direct result thereof providing new and useful improvements to the way we view electric motors and think thereof.

In short the device may be described as such,
A balanced mass held in a vertical position utilising permanent magnetic repulsive interaction allowing it to tumble from left to right as a result of ambient vibrations abundantly present in any vehicle, attached to said tumbler a magnet moves though a coil fixed to the frame. Electrical energy 'drained' depends on the magnets strength thereof and the coils windings thereround, while mechanical energy drawn into the system depends on the mass's weight therebetween and the ambient vibrations unleashed thereavailable. In this illustration a T shape is used but any shape will do. You can see 2 repulsive magnetic setups entrapping it in said vertical position. Attached to this T shape there is an arm moving a fifth magnet trough a coil. 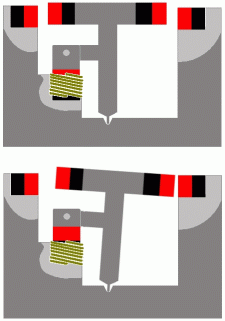 Extra weight should be added on top of the tumbler in order to amplify the ambient vibrations up to a point where they match the force of the magnetic repulsion. Such configuration allows a very small push to move a very huge mass.
The coil eats away on the energy generated but it can't present any drag until the tumbler moves thus it can never prevent the motion thereof from perpetuating entirely. At best the coil may dampen half the force of oscillation, the permanent magnets do not care how close together they are or how fast they get pushed together, they always behave in the same way and push back until balance is restored.

Desperately seeking it's balance it obviously wont bounce left to right for as long as it would while moving free. But as long as small/meaningless/weak seed vibration is supplied it will generate electricity perpetually. Any vehicle can provide such vibrations.
The real miracles start to happen when the car is sufficiently engineered to provide it's entire mass for such device. In a large scale implementation the repulsive electromagnets may be supported with springs and levers. Here is a side view of such.

This image only shows 2 shock absorbers, for the best effect the vehicle should have 2 layers with 4 collectors per layer. 4 tanks holding a liquid may be used to electronically pump and adjust for a perfect balance.
Using 4 spring/coil collectors in 2 layers the vehicle is not subjected to left/right and backwards/forwards bouncing effects, the carrosserie moves in circular motion above the wheel base.
The friction suffered by a tumbler is one millionth of that of any rotary applications. Bearings are at best not ideal. This is why old mechanical clocks utilise a pendulum rather then a flywheel.