To all whom it may concern be it known that I, Gaby de Wilde, artist, subject of the Dutch Queen, of Dutch nationality, a citizen of the independent monarchy of the Netherlands governed by members of the House of Orange Nassau, residence of Enkhuizen, in the Province of North-Holland the Kingdom of the Netherlands, have invented certain new and useful implementation of the art of shielding magnetic flux fields in order to obtain rotary motion I hereby declare ofwhich the following specification to be a full, clear and exact description of the invention, such as will enable others skilled in the art to which it appertains to make and use the same. 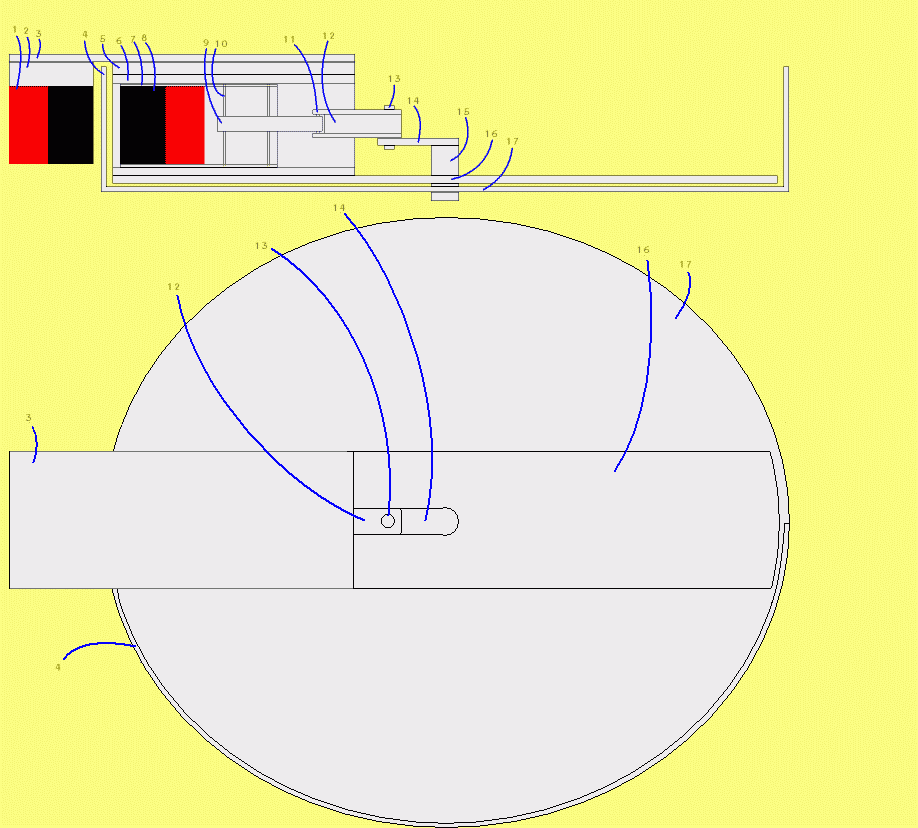 The shield[4] is fixed halfway around the rotor disk[17] thus is rotated between the 2 repelling magnets and shields them over half a cycle, it then rotates out of that position and reveals said repelling magnets thus therefor subjecting the piston to their repelling force.
Evidently the force is generated by the magnets, it is not translated from the motion of the shield.

As the shield is magnetized by the magnet on the rotor the piston will suffer some resistance moving towards it in contrast with said piston moving in the other direction this force now pushes directly against the shield, said shield cant be pushed away until it's edge is within reach, the force accumulates and before the piston starts it's power stroke it first launches the shield.
As described in my previous paper[19] the shield may be configured to suffer a gain both while moving into position thus attracted by 1 magnet and while moving out of position repelled by 1 magnet while still attracted by the other. The force pushing the shield away may be just as big as the gain in force working upon the piston.

When the shield[4] of the rotor disk[17] is at the top of the wheel it is slightly pulled over it's slowest point in gravitational oscillation by the stator magnet[1] wherefrom some momentum is gained whereafter the shield passes it's lowest point at it's highest speed and moves away from the magnets while moving away no energy is lost rather gained as described above thus there is nothing preventing us from "stealing" a bit of gravitational potential while performing such interactions.
The invention is really an embodiment of 3 different effects. There is no reason to think devices like "the believe machine"[20] do not work exactly as displayed and described hereby.

Thus therefor and so on to those skilled in the art unlimited rotary configurations are possible as a result thereof if not taken as a correction of the magnetomecanical rotary art as a whole.