The reversal of magnetic fields through the combination thereof.

To all whom it may concern be it known that I, Gaby de Wilde, artist, subject of the Dutch Queen, of Dutch nationality, a citizen of the independent monarchy of the Netherlands governed by members of the House of Orange Nassau, residence of Enkhuizen, in the Province of North-Holland the Kingdom of the Netherlands, have invented a new and improved method of reversing a magnetic field in the most general sense thereof I hereby declare ofwhich the following specification to be a full, clear, exact and accurate description of the invention, such as will enable others skilled in the art to which it appertains to use the same. 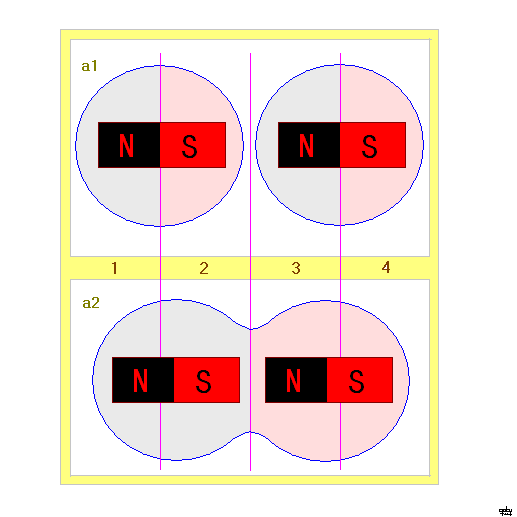 In configuration a2 we observe 1 field erected by 2 permanent magnets. the purple line again represents the domain wall. Thus therefor the dramatically difference in configuration a2 with respect to configuration a1 has thus been made sufficiently evident hereby. To further clarify, flux zone 1 and 4 have increased in intensity but more importantly zone 2 and 3 have reversed their magnetic polarity entirely.
One may conclude from such that the additional flux required for both magnetic vortexi to combine into one is far smaller as the flux changes in the field propagated therefrom.