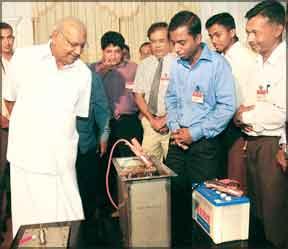 Tired of spending the better part of your income on refuelling your four wheeler ? Young Thushara Priyamal Edirisinghe may have the ideal solution for your problem which keeps worsening with every hike in world oil prices.

Thushara, a 25-year-old from Athurugiriya, is the inventor of what could be a ground-breaking technology of powering a car by water, using an extremely low amount of electricity.

According to the the young inventor, the generator he has designed is capable of running a motor car for 80 kilometres using only one litre of water, without any danger to life or any impact on the environment.

The energy required to power the vehicle is produced by the splitting off of H2O (water) into separate Hydrogen and Oxygen molecules, of which the former is burnt according to a specified ratio to produce the energy needed to power the engine.

âThe technology of using water to produce hydrogen gas has been existing for the past 60 years. In certain countries, water-powered vehicles have also been produced using Hydrogen found in water.

The specialty of my invention is its ability to produce this energy from water with a minimal electric current of barely 0.5 amperes, which was not possible earlier,â Thushara says.

A product of Christ King College, Pannipitiya, Thushara, on his test run of the water-powered car, has travelled all the way to Anuradhapura and back on mere three litres of water, a journey that would have cost several thousand rupees on a petrol or diesel vehicle.

âThis generator could be fixed to any petrol or diesel vehicle with suitable adjustments depending on their cylinder capacity. While Hydrogen is 1000 times faster than petrol, the exhausts of water-powered vehicles consisting of water vapour are also entirely eco-friendly. Using water as opposed to oil that react with lubricating oil would also extend the life of the vehicle,â he adds.

Prime Minister Ratnasiri Wickramanayaka who met the talented youth at Temple Trees yesterday extended the Governmentâs fullest support to his efforts to introduce the water-powered car to the Sri Lankan market.

The Premier also pledged to provide facilities for the venture including a plot of land to carry out the conversion of fuel-powered engines to water-powered ones, bank loans etc.

âA number of foreign companies from the United States, Australia and Korea approached me to buy the technology behind this invention. But, I have decided to put my creation to use in way that helps the development of my country,â Thushara said.