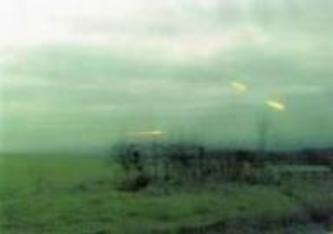 MORE responses to sightings of 'orange lights' UFOs near Louth have been pouring into the Leader with some wondering if recent UFO activity is connected to the Large Hadron Collider experiment in Geneva. A man called Anthony from Wales emailed a similar account of what he saw: "I was having a cigarette outside my front door on Saturday at around 9pm and I looked over the roof tops and saw two orange-red glowing lights coming from over the hill where I live.

All molecules are made of a single particle, they render one by one just like the Tee Vee picture. Apparantly ET isn't going to sit around waiting for us to nuke the gallaxy?

CERN's idea of "perfectly secure" is poetically illustrated by their webserver.

Hackers have mounted an attack on the Large Hadron Collider, raising concerns about the security of the biggest experiment in the world as it passes an important new milestone.

But we all remember Titor don't we? Our time traveling bubby who jokingly explained everything on coast to coast (of all places) knowing no one would take him seriously enough to desturb the timeline?

......You mentioned previously the year 2008 - what's significant given your observed 2.5% difference between this time line and your own?

You mentioned a certain model (204) travel unit - what is the source of power and what type of 'engine' is used?

If as you claimed, most of the requisite information has been around since 1970's - and yet time travel is not public until ? 2045... why is it that a time traveller can not divulge design information that would demonstrate its reality. Are there missing common elements/materials yet to be discovered or engineered?

The 5100 had a very simple and unique feature that IBM did not account for and decided it was not in their best interest to advertise (which in hindsight was not very smart). This accidental feature was thus removed from any future desktop computers. In order to take advantage of this feature, the 5100 I have now required a couple of special âtweaksâ that had to be done by one of the software engineers in 1975. Anyone who is familiar with this feature and was told to keep their mouth shut about it will be able to tell you what it is.

I have noticed and gotten used to the act of verbal conflict as a cathartic entertainment. I donât totally understand it but I take no offense by it either. Perhaps we could just arm wrestle some day and still be able to have a pleasant conversation.

The year 2008 was a general date by which time everyone will realize the world they thought they were living in was over. The civil war in the United States will start in 2004. I would describe it as having a Waco type event every month that steadily gets worse. The conflict will consume everyone in the US by 2012 and end in 2015 with a very short WWIII.

The source of power for the C204 that allows it to distort and manipulate gravity comes from two microsingularities that were created, captured and cleaned at a much larger and âcircularâ facility. The dual event horizons of each one and their mass is manipulated by injecting electrons onto the surface of their respective ergospheres. The electricity comes from batteries. The breakthrough that will allow for this technology will occur within a year or so when CERN brings their larger facility online.

Perhaps it would have been clearer to state that the math has been around since 1970. I would urge you to examine the properties of Kerr black holes and Tipler cylinders. An actual working prototype was first tested in 2034. On my worldline, time travel is not a public recreation but we are all aware that it exists. You may be disappointed to know that the ability to manipulate gravity is not the technical challenge that had to be overcome. Miniaturizing the clocks and sensors, creating clever ways to vent x-rays and creating a computer system dependable enough to calculate the changes required to the field were the main challenges. There are no missing piecesâ¦just missing energy levels and a few very interesting subatomic particles.

http://imagine.gsfc.nasa.gov/docs/ask_astro/answers/041130a.html
Can you explain the Kerr Black Hole in detail please? Also, how can it cause time travel?

The Answer
Thanks for your question. Kerr black holes were postulated by the theorist, Roy Kerr in the 1960s. He postulated that a rotating star could collapse into a black hole with a rotating ring of neutrons at its center rather than the usual singularity. Kerr believed that since there wasn't a singularity at the center, one might be able to travel through the black hole without being crushed by the singularity. Another theoretically possible scenario is that a person could enter the Kerr black hole and exit through a white hole on the other side (a white hole would actually push everything away from it using some form of exotic matter with negative energy), and, in this way, one could travel through spacetime.

While white holes may be theoretically possible, there is absolutely no evidence to support their existence. Many theorists do not believe there is any way to pass through a black hole and that even if it were possible, one would be torn apart by the enormous tidal forces well before reaching the singularity. You can read more about Kerr black holes at the following website:
http://www.astronomical.org/astbook/blkhole.html

Prior to 1905, space and time were comfortable absolutes. Over 250 years of practical experience and experimentation had firmly established the supremacy of the physics of Sir Isaac Newton.

Bla bla bla bla bla...
One of the very earliest solutions to the equations was developed by the German physicist, Karl Schwartzschild, in 1916.
ahhhhhhh

When the collapsing star passes its Schwartzschild radius, it vanishes from view because its escape velocity has exceeded the speed of light. Since, according to Einstein's work, nothing can travel faster than the speed of light, nothing, not even light itself
Bla bla bla bla.... Einsten this Einstein that....

So the wave freqency decreases below the resonant freqency of our atmosphere. A bit like the bubbles in pepsi light.

During the nineteenth century, it was shown by the Scottish physicist, James Clerk Maxwell that electromagnetic waves should exist, and that they would travel at approximately 300,000 km per second, the speed of light. Since all other waves required a medium in which to travel, it seemed inconceivable to Maxwell that electromagnetic radiation should be any different. Thus Maxwell reintroduced the idea of an ether, which served as the omnipresent carrier of these waves.
There is that pesky Ãther again. So Einstein didn't want us to figure out how things worked. Finally a working solution to all his gibberish.

Tipler cylinders of course suggest nothing more then a fast spinning hotdog of infinite length in order to create a frame draging effect for the passenger to spiral arround.

The stuff makes me laugh to hard to actually read it.

Lets start with Gravity being not a pulling force but a pushing one.

Then we take nothingness as the fabric of somethingness.

So rather than a lot of something a black hole is a lot of nothing.

The nothing makes up the doorway from one version of the gallaxy to another.

The paralel universe doesn't exist just like the one you imagine to be part of.

I mean, what do you think that soup is we call dreaming?

Then CERN wants to DDOS the carier. hahahahaha

But don't wory kids, when you break this "reality" I will just make you a new one.

A fresh start, I'm already looking forwards to it. :-)