There is such a thing as truly 'green' nuclear energy ---- no deadly fluxes of energetic neutrons and/or 'hard' gamma radiation, and no production of environmentally dangerous long-lived radioactive isotopes. It is called Low Energy Nuclear Reactions or LENRs. It is not based on nuclear fusion processes with high Coulomb barriers, nor is it based on heavy element fission reactions, both of which involve what physicists call the 'strong interaction.' Rather it is based on what are called 'weak interactions.' Being somewhat controversial and paradigm-shifting, LENRs are presently little reported in the media and premier scientific journals. Nonetheless, it is real science that has definite potential to become a commercially viable energy technology.

By way of background, The Institute of Science in Society (I-SiS) is a nonprofit environmental organization headquartered in London, UK (http://www.i-sis.org.uk/index.php ). Over the years, I-SiS has made notable contributions to efforts that aim to curtail the spread of genetically modified crops in Europe. Until recently, I-SiS (like Greenpeace) has also steadfastly opposed expanded use of nuclear (fission) power. However, after carefully evaluating LENRs in 2007, I-SiS altered its policy position on nuclear power. In fact, I-SiS now advocates commercial development and deployment of nuclear technology in the form of weak interaction LENRs (as opposed to strong interaction fission or fusion processes) as a truly 'green,' carbon-free nuclear energy technology. Accordingly, Dr. Mae-wan Ho, Founder and Director of I-SiS, recently published a series of short articles on LENRs that are suitable for a broad reading audience. To date, six such SiS articles have been published ---- there are URL hyperlinks to them down below.

#2. December 4, 2008
Widom-Larsen Theory Explains Low Energy Nuclear Reactions & Why They Are Safe and Green -
All down to collective effects and weak interactions
http://www.i-sis.org.uk/Widom-Larsen.php

#3. December 10, 2008
Portable and Distributed Power Generation from LENRs -
Power output of LENR-based systems could be scaled up to address many different commercial applications
http://www.i-sis.org.uk/PortableDistributedPowerFromLENRs.php

#5. January 26, 2009
Safe, Less Costly Nuclear Reactor Decommissioning and More
How weak interaction LENRs can take us out of the nuclear safety and economic black hole
http://www.i-sis.org.uk/safeNuclearDecommissioning.php

There are also technical publications on this subject as follows:

Organised by Demeter-International e.V. and ISIS (The Institute of Science in Society) under the patronage of MEP David Hammerstein-Mintz

It's sad to see what has happened to low energy nuclear science, with all respect I seriously doubt the researchers have a clear picture of the many accomplishments and most of the documentation was lost over the years. My skills are in internet research, it's a lot of work keeping up with everything everyone else is doing. Even if I had the skills, time and money I wouldn't know where to start.

I'm overwhelmed by the seemingly endless list of o-lysis technologies.

I think you should take a look at Professor ??????? ?.?. (Kanarev)'s work. He wrote an overwhelming bulk of material but it seems he had working models for years and is still alive I should add.

In contrast with John Kanzius who passed away last week. (Here is that video I assume you have seen.)

The main thing missing in the field is the engineering part. The fastest way to bring the technology to the market would be for scientists to start working on existing motor vehicles. This is very far from the current laboratory paradigm.

The sterile environment is of course desirable in order to understand the effect but not at all compares to the violent climate inside car engines. Mechanical and acoustic vibrations, heat, pressure, vacuum and back emf spikes from the alternator all exist "naturally" in such system.

The real world implementation is very different from the table top. We don't need 110% efficiency, it would be nice but 90% is already fantastic.

Imagine starting out with a plasma reactor?

If the jar containing the fuel mixture can have any effect generating "anomalous" heat of any kind (think a Fresnel lens) the system generates additional fuel directly from this heat.

Panacea BOCAF is working to uncover a spark plug technology that makes plasma explosions inside the cylinders.

Combine all the small effects and we can convert existing vehicles to run close enough to unity to make a huge difference.

It also opens the door for future cold fusion implementations.

The only problem is that every sub set of research has been fearmongered into doing private research.

I tried to add newenergytimes to the wikipedia page about cold fusion it then told me the website is considered spam.

Imagine how bad it gets when you drive a car on it?

Meyer got his frequencies from Dr. Andrija Puharich M.D.'s patent.

But Xogen (using the same frequencies) has a pilot plant now.

We have almost won. As Mallove put it:


"cold fusion was dead but the corpse won't stop twitching" 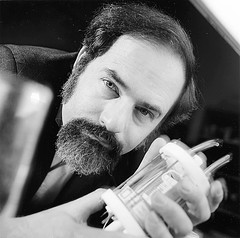