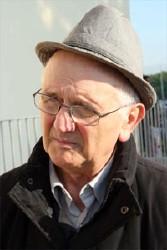 Italy: Church opens doors for Muslim Friday prayersTreviso, 9 Nov. (AKI) - A priest in Paderno di Ponzano near Treviso in the northern Italian region of Veneto, Aldo Danieli, has decided to allow Muslims to meet and pray in church premises in his parish on Fridays to foster better integration of immigrants in the local community.

I was always confused by the conflicts between religions. It all seemed so obvious - at least to me it did...

This can be read like: "Thou shall not pretend other gods exist". Now they all pray to the creator and the similarities do not end there! They do not by understatement!

Deliciously crazy man David Ike got some kind of prophetic message that sounded to weird to be real - today he is actually living that weird life described to him.

The Raelian movement sumerianises the plot as follows:

On the 13th of December 1973, French journalist Rael was contacted by a visitor from another planet, and asked to establish an Embassy to welcome these people back to Earth.

The extra-terrestrial human being was a little over four feet tall, had long dark hair, almond shaped eyes, olive skin, and exuded harmony and humor. Rael recently described him by saying quite simply, "If he were to walk down a street in Japan, he would not even be noticed." In other words, they look like us, and we look like them. In fact, we were created "in their image" as explained in the Bible.

He told Rael that:

"We were the ones who designed all life on earth"
"You mistook us for gods"
"We were at the origin of your main religions"
"Now that you are mature enough to understand this,we would like to enter official contact through an embassy"

The messages dictated to Rael explain that life on Earth is not the result of random evolution, nor the work of a supernatural 'God'. It is a deliberate creation, using DNA, by a scientifically advanced people who made human beings literally "in their image" -- what one can call "scientific creationism." References to these scientists and their work, as well as to their symbol of infinity, can be found in the ancient texts of many cultures. For example, in Genesis, the Biblical account of Creation, the word "Elohim" has been mistranslated as the singular word "God", but it is actually a plural word which means "those who came from the sky", and the singular is "Eloha" (also known as "Allah"). Indigenous cultures all over the world remember these "gods" who came from the sky, including natives of Africa (Dogon, Twa, etc.), America, Asia, Australia, and Europe.

Leaving our humanity to progress by itself, the Elohim nevertheless maintained contact with us via prophets including Buddha, Moses, Mohammed, etc., all specially chosen and educated by them. The role of the prophets was to progressively educate humanity through the Messages they taught, each adapted to the culture and level of understanding at the time. They were also to leave traces of the Elohim so that we would be able to recognize them as our Creators and fellow human beings when we had advanced enough scientifically to understand them. Jesus, whose father was an Eloha, was given the task of spreading these messages throughout the world in preparation for this crucial time in which we are now privileged to live: the predicted Age Of Revelation.

Here our scientific denial doctrine doesn't hold any nay saying ground anymore. Any scientist who denies the size of the universe in the 21th century is not a scientist at all. The idea (read "dogma") life originated on earth is far more silly than can be described using terrestrial language.

If man descended from apes it sure as hell didn't happen on earth and we have nothing to show for it being a random event. The difference in chromosome number is a dead give away indicating engineering then look how much tools and machines we need to live on this planet. We are the least adapted inhabitant crawling on this small blob of mud.

The ants in your garden didn't originate there. They might think they did but they didn't!

Anyway, praise Don Aldo Danieli for making such revolutionary decision. It is good to see the Italian church is not entirely corrupted by evil. ;-)