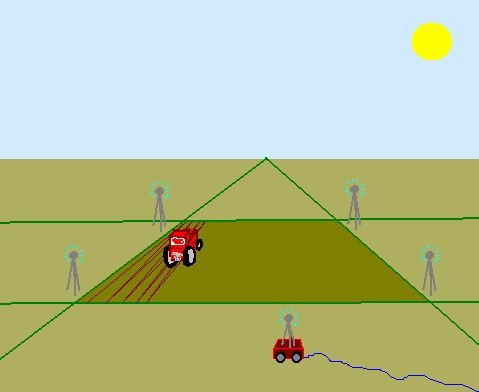 The mode of propagation of the currents from my transmitter through the terrestrial globe is most extraordinary considering the spread of the electrification of the surface. The wave starts with a theoretically infinite speed, slowing down first very quickly and afterward at a lesser rate until the distance is about six thousand miles, when it proceeds with the speed of light. From there on it again increases in speed, slowly at first, and then more rapidly, reaching the antipode with approximately infinite velocity. The law of motion can be expressed by stating that the waves on the terrestrial surface sweep in equal intervals of time over equal area, but it must be understood that the current penetrates deep into the earth and the effects produced on the receivers are the same as if the whole flow was confined to the earth's axis joining the transmitter with the antipode. The mean surface speed is thus about 471,200 kilometers per second--fifty-seven per cent. greater than that of the so-called Hertz waves--which should propagate with the velocity of light if they exist. The same constant was found by the noted American astronomer, Capt. J.T.T. See, in his mathematical investigations, for the smallest particles of the ether which he fittingly designates as "etherons." But while in the light of his theory this speed is a physical reality, the spread of the currents at the terrestrial surface is much like the passage of the moon's shadow over the globe.

It will be difficult for most people engaged in practical pursuits to measure or even to form an adequate conception of the intensity of inspiration and force I derive from that part of my work which has passed into history. I have every reason to consider myself one of the most fortunate men, for I experience incessantly a feeling of inexpressible satisfaction that my alternating system is universally employed in the transmission and distribution of heat, light and power and that also my wireless system, in all its essential features, is used throughout the world for conveying intelligence. But my pioneer efforts in this later field are still grossly misunderstood.

Yeah, we still don't quite understand this internet of his. hahaha I was having one of those illusive ideas again, you know... the kind people tend to laugh in my face about. My ideas are about 1/1000 as weird as those of Tesla must have been.

Now I was thinking, today we have something like 50 different systems for wireless transmission of electricity (or just power) that are perfectly workable.

When looking where best to implement this Tesla's idea was interesting but a bit to unspecific. It wasn't very smart to attack all of the whole world energy production and distribution peoples at the same time either.

Say one was to engineer a short range wireless power transmission system with say 100 to 500 meter range and design an electric tractor to consume this power.

One cant drive the tractor down the field with an extension cord attached to it.

But we can move the transmiter arround and plug it into the grid, use extension cords to take the thing far far down the land.

It would be a bit of a clumsy operation BUT the tractor can be enormously powerful for it's weight while being enormously cheap to operate. For a conventional electric car the batteries are the most expensive part by various landslides.

I further more suggest using cows in formula 1700. Using modern bearings and modern generators a single cow can generate enormous power. This would be ideal to power the wireless tractor giving us an advanced variation of formula 1500. Working the field with cow power.... funny? You betcha, but how much sense does it make?

Solar is also nice, but it costs an additional heap of cash and it doesn't quite generate the power we need for a multipurpose tool.

UPDATE (AUGUST 2003): Ron Khosla, a small-scale organic farmer in New York state has converted an Allis Chalmers G to electric and told me "Our electric 'G' is absolutely the most important tractor on the farm. It has three times the power of the original 'G' which is huge and [has] enough battery life to do everything we need to on our diversified 8-acre farm. [...] It's totally silent. You can creep along MUCH more slowly than we could with gas. It's silent. It doesn't smell. It's NO MAINTENANCE. [...] "It also has changed the way we operate the tractor. This is a psychological thing, but it's real. With the gas tractor, we were less likely to stop in the middle of the row to adjust things, or clean a shoe, or whatever. With the [electric] tractor... somehow there is psychologically less inertia... And we stop ALL THE TIME to make final adjustments which has resulted in a better job. When you stop, you are stopped. No engine running. It's just quiet and silent, no cloud of white smoke drifting over your head... nothing... Perfect silence. THIS is what sustainable farming is supposed to be about!." His initial conversion was fairly simple, using a common series wound DC motor, golf cart controller, and regular lead-acid batteries. After learning the hard way how to care for the batteries, he has added meters, deep-cycle golf-cart batteries, and a better charger. He is planning to do a second conversion as part of SARE grant, which will include documenting the process via a web site.